Sylveon (Japanese: ニンフィア Nymphia) is a Fairy Pokémon. It Evolution evolves from Eevee when leveled up knowing a Fairy move and having at least two Affection hearts in Pokémon-Amie. It is one of Eevee's final forms, the others being Vaporeon, Jolteon, Flareon, Espeon, Umbreon, Leafeon, and Glaceon.

Sylveon is a quadruped, mammalian Pokémon covered primarily in pale cream-colored fur with pinkish feet, ears, and tail. There are two bows on it, one on its left ear and one around its neck, from which two feelers adorn it. The bows are pale cream with pinkish centers, while the feelers are pale cream with pinkish and blue tips. It sends a soothing aura from these feelers to calm fights, and will also use them to "hold hands" with its Trainer. It has short, slender legs and small paws with three visible toes on each foot. Its eyes are blue with white pupils and no visible sclera. When its mouth is open, two pointed teeth can be seen on its upper jaw. Its furry pinkish tail is slightly curved in a crescent shape. 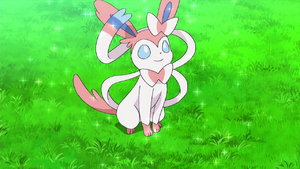 Sylveon in the anime

Sylveon made its debut appearance in the Pikachu short PK25 Eevee & Friends.

Sylveon made its anime debut in XY013 Kindergarten Chaos! under the ownership of Penelope.